Thijs van Harte (whose mother is originally from Indonesia) and his wife Karin Leithuijser are supporting Indonesian education programmes since the nineties.

After the birth of their youngest daughter Tari, who is born with the Down Syndrom, they came in touch with the Dutch facilities and the education for children with a mental disability and they were very enthusiastic about it

During a trip to Bali, together with their friends Ronald van den Heuvel, Marijke Lingsma and Rien Gruter they were wondering about how the education is for children with a mental disability in less fortunate countries and they have decided to investigate the possibilities to help projects that support such special education.

Although there were schools for children with a mental disability, the standard for education and professionalism in Bali is less developed than in Western countries. Therefore, the common dream and vision to contribute to this development and thereby the purpose of the foundation became clear:

"To improve and increase the learning possibilities, communication, capabilities and independence of children with a mental disability. With the usage of several play and learning materials and methods and to support schools and teachers in the practise of this goal."

Further contribution to the vision and the establishment of the foundation is the death of Thijs’ twin brother Jaques (pet name Sjaki) van Harte, in September 2002. In the previous period Thijs, Marijke and Jaques talked about the support of children in Indonesia, but unfortunately this could not be established before his death. The name of the foundation Sjaki-Tari-Us means the following;

To support beautiful children like Tari in their development and prosperity and bringing this to action with Us all, in loving memory of Sjaki.

Foundation Sjaki-Tari-Us was founded in September 2006. 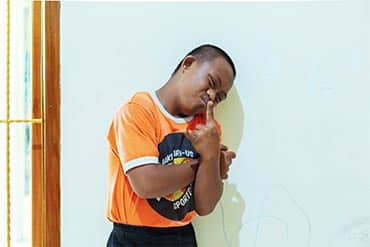